Workshop & Event
Weekly Newsletter, 08/22/2019
State-wide PMGDISHA camps in Odisha
With a view to encourage complete digital literacy in rural India, CSC Odisha team had organised state-wide camps to promote PMGDISHA scheme.
VLE Anil Kumar Gouda
VLE Anil Kumar Gouda led the PMGDISHA camp in BlockKukudakhandi, in gram panchayat Bangarada, Odisha. The camp was huge success and several people reached the camp venue to register under PMGDISHA. VLE Anil Kumar Gouda was positive about the citizens’ response. He said, “People in Kukudakhandi are very keen on digitisation and are opting for the digital learning services delivered by the CSCs. They want to explore more with the Internet and technology.”


VLE Mamata Pattnaik
PMGDISHA camp led by VLE Mamata Pattnaikat her CSC in BlockKukudakhandi, in gram panchayat Chathipalli,Ganjam, Odisha, witnessed a huge rush of candidates. People from all walks of life reached the camp venue to register under the scheme. VLE Mamata said, “It is very encouraging to see how people want to learn technology and devices. I am sure that the digital learning delivered at the CSC will definitely benefit the villagers here and more people will come under the PMGDISHA’s domain.” .


VLE Anjali Chourasia
PMGDISHA camp at Block Sundargarh in gram panchayat Kutra, district Sundargarh, Odisha was held by VLE Anjali Chourasia at her CSC. A huge number of people were witnessed at centre. VLE Anjali seemed optimistic and remained proactive in PMGDISHA registration. She expressed, “The camp here was a success. This shows that people at Sundargarh are serious about digital literacy. PMGDISHA is a ray of light for the rural people as they are the last to witness any digital or technological development.” 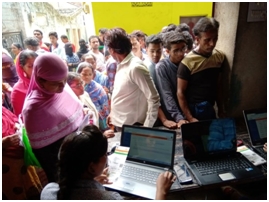