Highlights
Weekly Newsletter, 08/16/2018
PMGDISHA: Path to their empowerment
It is no wonder to know the denizens of Sheikhpura villages are enjoying myriad of services at their fingertips. And they say this is all because of the Hon’ble Prime Minister Shri Narendra Modi’s visionary project named Pradhan Mantri Gramin Digital Saksharta Abhiyan.

Expanding the digital literacy programme, VLE Brajesh Kumar has set up a new computer training centre to bring the disconnected villagers and empower their lives.

A centre, with three laptops and other amenities including printers and internet connectivity, was inaugurated by CSC District Coordinator Manikanth Upadhyay during an event held at Ambari.

After inaugurating the centre, Mr. Kumar registered more than 130 candidates. According to the VLE, the villagers have been expressing great enthusiasm towards the PMGDISHA scheme.

“Most of the villagers have been very supportive and enthusiastic about the scheme. I was surprised to see the women queuing up at my centre for enrolling themselves for the scheme,” said Brajesh Kumar.

According to the women beneficiaries, they can help their kids in teaching the digital devices and other tools. Brajesh has also been conducting many awareness drives at different parts of Ambari. VLE Bajrangi Malakar from Othma Panchayat has also been actively promoting PMGDISHA in the Sheikhpura District 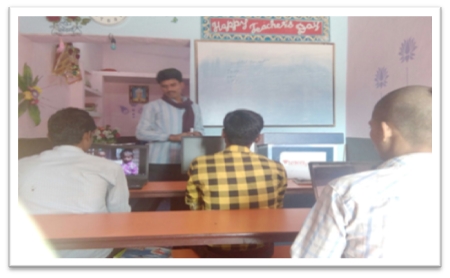