State scan
Weekly Newsletter, 03/25/2021
PMGDISHA Success Story
Meet Gitanjali Bhoi from Village Tabada, District Deogargh, Odisha. She completed her graduation in Science but she always had an aspiration to learn Computer but there was no scope to learn computer at her village. One day, she got to know about the free computer course at Janaseva Kendra, Gundiapali G.P. She contacted VLE Sukant Bhoi and he enrolled her in the PMGDISHA course. She learned about the internet, cashless transaction, and basic computers. Later she also learned all the computer courses at his centre. After her course of PMGDISHA, VLE Sukant Bhoi gave her a chance to teach computers at his centre. Now she is happily doing the job of receptionist and faculty at NICET computer institution situated at Rengalbeda, Deogarh. 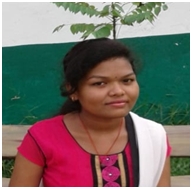